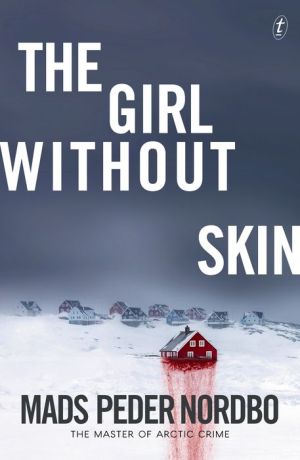 The Girl without Skin by Mads Peder Nordbo They were near the edge of the glacier. The sea beneath the helicopter was dense with pack ice. In front of them, the endless whiteness stretched as far as the light could reach. It hurt his eyes. Millions of white crystals. Except in one place. One spot. Right where the mummified Norseman had been found and Aqqalu had kept watch. There, the ice was glossy red. When a mummified Viking corpse is discovered in a crevasse out on the edge of an ice sheet, journalist Matthew Cave is sent to cover the story. The next day the mummy is gone, and the body of the policeman who was keeping watch is found naked and flayed—exactly like the victims in a gruesome series of murders that terrified the remote town of Nuuk in the 1970s. As Matt investigates, he is shocked by the deprivation and brutal violence the locals take for granted. Unable to trust the police, he begins to suspect a cover-up. It’s only when he meets a young Inuit woman, Tupaarnaq, convicted of killing her parents and two small sisters, that Matt starts to realise how deep this story goes—and how much danger he is in. Mads Peder Nordbo is a Danish-born author who has lived in Nuuk in Greenland for many years. He holds degrees in literature, communications and philosophy from the University of Southern Denmark and the University of Stockholm. He works in communications at the town hall in Nuuk, where he writes for the mayor of the municipality. Mads is the author of three novels, and The Girl without Skin is his crime debut. Rights have been sold in seventeen territories. Charlotte Barslund is a Scandinavian translator. She has translated novels by Peter Adolphsen, Mikkel Birkegaard, Thomas Enger, Karin Fossum, Steffen Jacobsen, Carsten Jensen and Per Petterson, as well as a wide range of classic and contemporary plays. She lives in the UK. ‘The Girl Without Skin has everything the heart of a true crime novel could desire. Murder, eeriness, shivers, superstition, terrible secrets – but at the same time you can feel the author's affection for Greenland.’ Krimifan ‘The Girl Without Skin has is large parts a classical crime combined with a thriller’s intensity—but just as much social criticism.’ VG Norway ‘This intricate crime novel is incredibly thrilling, and offers some genuine surprises.’ Finals Krimiside ‘The plot is gruesome, believable and incredibly tense.’ Bogfidusen ‘Mads Peder Nordbo has written a macabre but engrossing Arctic crime novel about incest and corruption.’ Jyllands-Posten ‘Lucky Nordbo has given his main character a troubled past, which makes it plausible that he would fling himself fearlessly into investigating the older killings that breath new life—and death—into a corrupt political present.’ Børsen ‘Mads Peder Nordbo writes with great insight into the environment of Greenland, in which the nearly unbearable events play out.’ Jysk Fynske Medier


نظرات()
play8oy android download
Here are some web design tips you'll be able to
use come up with your website appealing to users. Give them exactly what she want at the same time website traffic will
add to.

DOWNLOADS Why Buddhism Is True: The Science and Philosophy of Meditation and Enlightenment..........جمعه 16 فروردین 1398